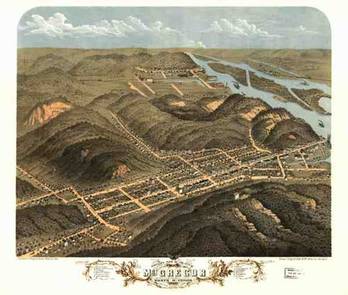 NOTE: You may view a large-scale 1869 hand-drawn map like this at: McGregor Public Library ~ McGregor Historical Museum ~ McGregor City Hall.
Alexander MacGregor’s grandparents, John and Anne MacGregor, and their three sons immigrated to the United States from Scotland in 1785.  One son, James, and his wife, Elizabeth Cameron, were the parents of Alexander MacGregor, the founder of McGregor, Iowa.

When Alexander MacGregor came to northeast Iowa, four Indian tribes roamed the area: Sioux, Sauk, Fox, and Winnebago. These tribes occupied a land rich in fur-bearing game they hunted and then sold their furs to the white traders across the Mississippi River in Prairie du Chien, Wisconsin. Conflict over hunting grounds caused frequent warfare among the tribes. These conflicts were finally resolved in 1830 by the establishment of a neutral zone roughly 40 miles wide that extended west along the Upper Iowa River on the north.

This meeting was called by the United States government to rendezvous the tribes took place between the tribes and  United States government’s rendezvous on the island at Prairie du Chien. At the time McGregor got its beginning there were Sioux, Sac and Fox and Winnebago tribes roaming northeast Iowa. They rendezvoused and traded their furs with other fur trappers and buyers on the eastern shore of the Mississippi River at Prairie du Chien, Wisconsin.
After the Blackhawk War ended in 1832, the United States government opened up the great, unsettled expansion of land west of the Mississippi River in 1833.  Government forts and military roads, fur trappers and traders, and the great pioneer spirit heading west helped to make McGregor an ideal spot for a ferry boat landing. Alexander MacGregor, a direct descendent of royal Scotsman Rob Roy MacGregor, established his ferry business and MacGregor’s Landing in 1837.  It quickly grew from a six-block-area settlement laid out by MacGregor in 1847 to a busy river community with a population of 200 in 1857.  The town was incorporated in 1857, and the town name was changed to “McGregor”.

​In that same year, the Milwaukee & Mississippi Railroad finished building a railroad track from Milwaukee to Prairie du Chien, Wisconsin, thus connecting Lake Michigan with the Mississippi River by rail. McGregor quickly became a major commercial center, and served as a hub where grain from Iowa and Minnesota could be transported across the Mississippi and sent on to Milwaukee via railroad. More railroads were built to connect McGregor with cities further west, and the city of North McGregor was established just north of McGregor to serve as its railroad terminus. After reaching McGregor from the west, trains were disassembled and railroad cars were ferried across the Mississippi to continue on towards Lake Michigan. 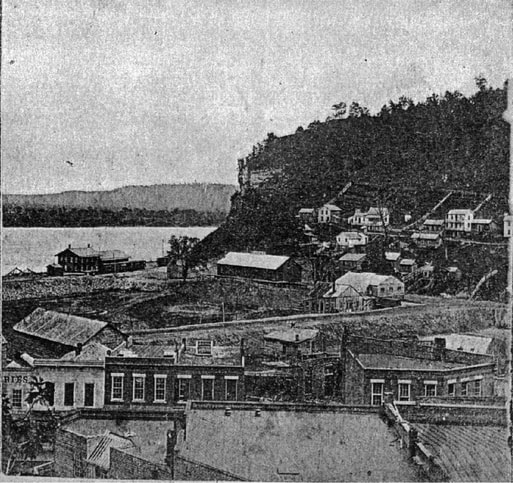 During the 1870s, the population of McGregor exploded to over 5,500 as the city became the busiest shipping port west of Chicago.  McGregor contained 120 businesses, 20 of which were connected to the shipping and receiving of grain and goods.  McGregor was self-sufficient and its businesses provided everything that was needed by the resident pioneer settlers or those passing through on their way to western frontier.

Steamboat traffic played a vital part in the town’s early life.  In 1871 – 1872, over 400,000 bushels of wheat, barley, oats, and corn were shipped out of McGregor to points north and south on the Mississippi River. The same year, city scales weighed 20,000 hogs, producing about 5,000,000 pounds of pork. Along with the railroad and improved highway transportation, steamboat traffic declined and rail traffic increased.
​
In 1874, the system of ferrying railroad cars across the river between North McGregor and Prairie du Chien, Wisconsin, was brought to an end when Prairie du Chien businessman John Lawler commissioned the construction of a permanent pontoon bridge to connect the two cities' rail lines. As the need for men to disassemble and ship trains across the river disappeared, the McGregor’s population began to decline.  River ferries that played such an important part in the town’s history were replaced with a suspension bridge built in 1932 just a mile north of McGregor.
McGregor Today
​Today the city's architectural history is preserved in its stately residential homes and nationally-registered downtown business district, which contain many buildings constructed during the city's boom years. Because of its colorful history and location beside the Mississippi River, the city has become a popular summer tourist destination.  Its natural setting in the Driftless Area, Effigy Mounds, and Pike’s Peak State Park provides manicured hiking and biking trails, camping and eagle watching.  McGregor is known for its many antique and specialty shops, and boasts fine dining, live local music entertainment and artists’ community.